" It is almost impossible to go through a whole day without learning something .. " so go ahead, take your pick and start your journey .. Lifelong Learning Adventures inspired by Charlotte Mason Homeschooling with a Living Books Curriculum


" The Shadow on the Stone"
by Thomas Hardy


I went by the Druid stone
That broods in the garden white and lone,
And I stopped and looked at the shifting shadows
That at some moments fall thereon
From the tree hard by with a rhythmic swing,
And they shaped in my imagining
To the shade that a well-known head and shoulders
Threw there when she was gardening.


I thought her behind my back,
Yea, her I long had learned to lack,
And I said: ‘I am sure you are standing behind me,
Though how do you get into this old track?’
And there was no sound but the fall of a leaf
As a sad response; and to keep down grief
I would not turn my head to discover
That there was nothing in my belief.

Yet I wanted to look and see
That nobody stood at the back of me;
But I thought once more: ‘Nay, I’ll not unvision
A shape which, somehow, there may be.’
So I went on softly from the glade,
And left her behind me throwing her shade,
As she were indeed an apparition—
My head unturned lest my dream should fade. 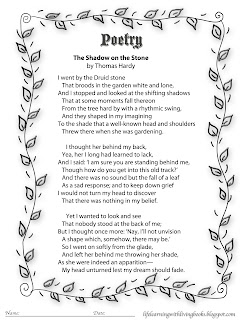 A Little History of the World - Gumbrich

Resources for Artists We Studied